Two stumps made of wood. The lifeless remains of a proud fir tree from Aichach in Upper Bavaria. Dead backdrop for two men with power. Beheaded by a chainsaw, abused as a standing desk in the courtyard garden of the Bavarian State Chancellery. The pictures of the joint press conference of Markus Söder and Sebastian Kurz in Munich shocked me.

It was a terrible sight - for the human eye it was probably comparable to the scandalous photos from the US prison camp Guantanamo. Chopping wood can be a great way to pass the time for people with a lot of pent-up frustration and excess energy. For us trees it is pure torture.

Okay, Markus Söder and Sebastian Kurz allegedly didn't hack the crown from the head of the poor Tanne themselves with an ax. The spokesman for the State Chancellery claimed at the beginning of the press conference that the tree was already dead before it was used by the gentlemen in suits as a storage space for their non-existent speech manuscripts. Söder cleverly said that plastic tables were even worse for the ecological balance.

You journalists just laughed instead of asking what the fir tree died of.

Maybe man-made climate change? Rising temperatures, long periods without rain and storms favor pests such as the oak processionary moth or let trees simply die of thirst. Never since the beginning of the state surveys have so many trees died as last year, according to the forest status report of the Federal Ministry of Agriculture. Only a fifth of the treetops in German forests are still healthy.

The scene from the courtyard garden reminds me of a picture from the world bestseller »The Mole in the City«, the Bible of all threatened trees. Mole, hedgehog and hare sit on a tree stump, frightened. Around them an army of dead trees, cut down by people who subjugate nature. Because it needs space for industrial parks, dormitories, cable cars, third runways, what do I know. Areas as large as 15 soccer fields are in a day Bavaria eaten.

I seriously believed in Holzkopf, Markus Söder would have understood that by now. He wants to plant 30 million trees in Bavaria! "Bavaria is the number one woodland," he promised! He has initiated a species protection law XXL! in the Christian Social Union-Fan shop there is "CSU tree seeds Robinia" on sale for 5,99 euros! In Ethiopia he planted an olive tree himself!

I admit: The image of him hugging a tree almost tenderly must have blinded me. It was created two years ago in the same place, in the garden of the State Chancellery. Since then it has been hanging on the wall in one of my knotholes. But not for long. Today Markus Söder showed his true colors. The environment, nature, us trees, all of this is just a backdrop for him. Bad show. And everyone participates.

"Mr. Kurz, would you have been happy if Markus Söder had become the Union's candidate for chancellor?" Was the second of the poor two questions you journalists had in store. 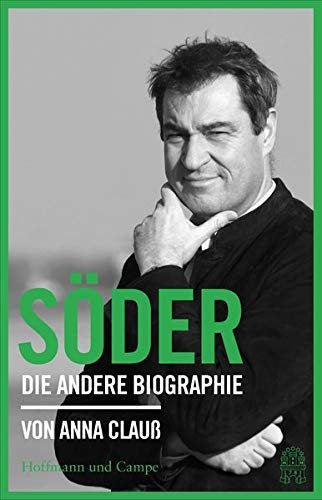 
Söder: The other biography

Product reviews are purely editorial and independent. Via the so-called affiliate links above, we usually receive a commission from the dealer when making a purchase. More information here

The subject was so expectable that the Austrian smiled and said that he had actually expected the question in the first place. Then he elaborated on a lengthy standard answer, which roughly contained that the imminent "ecological transformation" of Germany was so important that it needed a strong union, regardless of which candidate for chancellor.

It was such a lame blah that even Söder remarked that the answer could have been a little more euphoric.

I would have been very interested in why a fir tree had to lose its life to cover the lower bodies of two men who did not submit a forest damage report. Instead a lot of Corona, a lot of good cooperation, small border traffic to Austria possible again from Wednesday. A tweet would have been enough to make the results of the meeting public.

Oh, it is obvious that this lumberjack number was only there to distract from the bad polls of the CSU in Bavaria. While Söder and Kurz produced beautiful, green pictures, the CSU parliamentary group sat together in the state parliament without the party leader and prime minister. Closed conference, motto: "Strong out of the crisis". Söder's party lost ten percentage points in the last Sunday question about the state election in Bavaria. From the absolute majority it went down to 36 percent.

If trees had a voice, the result would be even worse. I will not allow myself to be offered another dull production.